In 2014 cyclone Ian cripple the Ha’apai groups and in 2017 cyclone Gita paralyze the main island of Tongatapu and ‘Eua.

In both cases Tonga National Youth Congress, D.R.R division responded, with the Ha’apai case a desalination machine was send to turn sea water to drinking water and with Gita a punch of volunteers took up the task of cleaning water tanks across Tongatapu and ‘Eua. 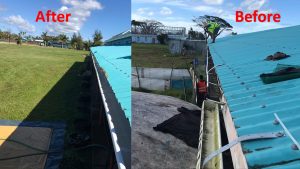